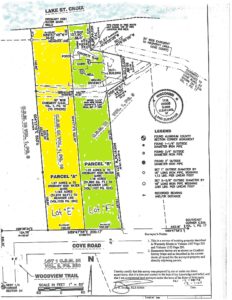 Government won’t pay the Murrs after taking the family’s lot on the left because the family also owns the lot on the right.

Many briefs filed in Murr at the Supreme Court

After we filed our opening brief in Murr v. Wisconsin, we received a large number of amicus briefs in support of the Murrs from a variety of parties. These included 9 states, other legal foundations and think tanks, and a number of land use and real estate industry groups. All these briefs agree that Wisconsin’s practice of shoehorning two independent lots together so a local government can avoid paying for the taking of one lot is unconstitutional. For more, and a link to the briefs, see our website here and our blog post here.

WOTUS rule remains at the 6th Circuit Court of Appeals

Challenges to the new “Waters of the United States” or WOTUS rule will remain in at the 6th Circuit court of appeals, at least for now. This is, of course, EPA’s new broadly expansive definition of those wetlands subject to the federal government’s hard-fisted regulatory scheme. We had asked that the court reconsider it’s decision to take the case out of the trial court, but the court declined. But at least the injunction against enforcing the law remains in place. You can see our blog post here.

We filed this amicus brief at the Supreme Court in Trinity Lutheran Church of Columbia v. Pauley. This is the case where the state of Missouri helps schools with equipment — here ground up tires used for a day care playground. The problem is that the State decided not to help out because the day care is affiliated with a religious institution. This seems to be a blatant discrimination against religion. For more see our blog here.

The Supreme Court denied our petition asking it to review a lower court ruling that upheld discriminatory hiring practices by the United States State Department. You can read more about Shea v. Kerry here.

The district court issued this decision in Cedar Point Nursery v. Gould upholding the ability of unions to enter onto private property for the purpose of organizing — creating a de facto easement on the property. The court did, however, ask for further briefing on whether this was a violation of the 4th Amendment.

Because a state court recently enjoined the state of Montana’s rule that forbids parents from utilizing a tax credit program to send their children to private religious schools, the federal district court stayed our lawsuit in Armstrong v. Kadas on the same issue.