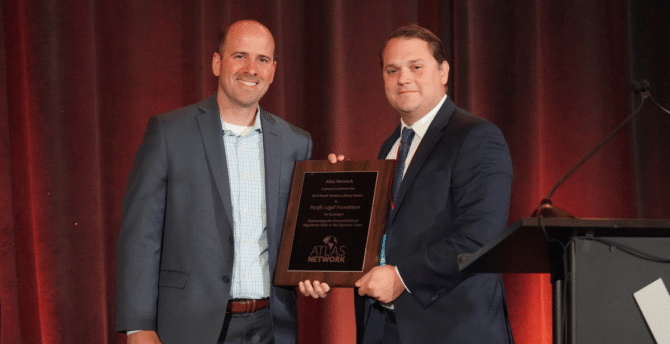 The award was presented in recognition of PLF’s work to roll back the regulatory state through Supreme Court ligation.

“The ever-growing, runaway regulatory state represents the most significant threat to liberty today,” PLF President and CEO Steven D. Anderson said. “We’re grateful for the Atlas Network’s recognition of our strategic litigation to beat back the unconstitutional expansion of government power.”

The U.S. Supreme Court considered three PLF cases on their merits in 2018, securing victories for free speech and property rights in two of those cases. The third case, Knick v. Township of Scott, will be decided in the coming weeks.

Last year, PLF redoubled its efforts to take down the regulatory state when it launched the Center for the Separation of Powers. This new center implements strategic litigation and legislative and executive outreach to enforce the proper understanding of the Constitution’s separation of powers.

“This award shines a spotlight on Pacific Legal Foundation’s solutions, and we hope it will also inspire other freedom-loving allies to join us in this battle to protect individual liberty for every American,” Anderson said.