Supreme Court oral argument less than a week away 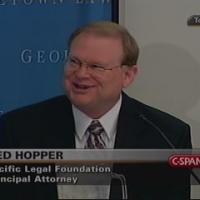 e United States. Yesterday, the U.S. Solicitor General’s Office filed its Reply Brief in the case, likely the last paper either side will file before the oral argument.

Reed Hopper leads the Hawkes team for PLF. This is Reed’s third time appearing before the Court on the merits of a case. He co-counseled and second chaired PLF’s winning Sackett case (argued by PLF attorney Damien Schiff), and argued and won the Rapanos case back in 2006. This latest case deals with the fundamental right of access to the courts when the government takes action that handicaps you in your desire to economically use your own property, and you wish to challenge that government action and use your property free of unreasonable and unconstitutional federal interference.

The federal government does not want you to have that right of access to the courts; instead, the government wishes to take away your rights and then decide at a time of its own choosing when you should “be allowed” to take it to Court for having done so.

That is not the system of justice our Founding Fathers contemplated. When the government tries to control people’s lives and property, people should not have courtroom doors slammed in their faces. They must not be denied their day in court. Otherwise, our system of checks and balances has no meaning.

We believe that the eight highest judges in the land will agree with us.