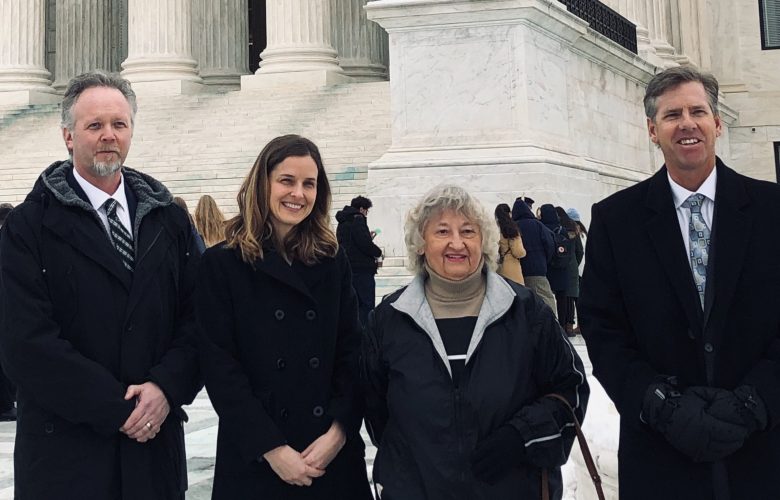 Much of what happens inside the Supreme Court is shrouded in mystery. So Rose Knick doesn’t know why she has the rare distinction of having the court hear her case twice this session. But that won’t stop spectators from guessing, especially with the unusual circumstances surrounding her case.

In October, while most of the country was focused on Brett Kavanaugh’s tense confirmation battle unfolding in the Senate, Rose Knick’s attention was fixed on the other eight justices. Just days before Justice Kavanaugh was sworn in, she sat in the courtroom while the eight-member Court heard argument in a case about her property rights—a case that will affect every American’s ability to enforce their constitutional rights.

In November, the high court ordered additional briefing in Rose’s case and scheduled a somewhat rare, second round of argument for Jan. 16, 2019. Some have suggested that the order for additional briefing is just a fig-leaf to cover the court’s real purpose of bringing in the newest justice to break a 4-4 tie. But given the questions raised in the first round of arguments, it is also fair to think the individual justices are truly wrestling with whether and how to best overturn a 33-year old decision that put Rose and many property owners across the country in second-class status.

Rose’s case arose when a small town in rural Pennsylvania decided to open her private farm to the public. The town passed an odd ordinance allowing town officials to snoop around on private property for evidence of gravesites. Then under the authority of the ordinance, the town unilaterally declared part of Rose’s land a public “cemetery,” and commanded her to open her property to the public and maintain the area like a cemetery—pulling weeds, trimming shrubs and otherwise aiding in the public’s ability to view the purported gravesite.

The Fifth Amendment to the U.S. Constitution requires that government pay you when it takes your private property and opens it to the public. But the town did not pay Rose Knick; it did not even acknowledge that it had triggered the protections of the Fifth Amendment. Instead it threatened her with $600 daily fines if she failed to comply.

When Rose tried to protect her rights in state court, the state court said she’d have to wait around until she was actually prosecuted before it would hear her case. So she went to federal court to enforce her federal constitutional rights. But that court said it couldn’t hear her case because of a 33-year old Supreme Court precedent, Williamson County Regional Planning Commission v. Hamilton Bank of Johnson City.

In the Williamson case, the Supreme Court essentially held that property owners would have to file their federal property rights claims in state court before they could go to federal court to enforce their rights.

In 2005, the Supreme Court admitted that the presumption that property owners could finally get in federal court after losing in state court was wrong. Once they lost in state court, a property owner would be barred from getting a second bite at the apple by filing in federal court. In other words, the Williamson case closed the federal courthouse doors to federal property rights claims, relegating the just compensation guarantee of the Fifth Amendment to second-class status.

Now, more than a decade after admitting its faulty presumption in Williamson, the court will decide whether to overturn the Williamson decision in Rose Knick’s case.

Whether this case is as close as some spectators suggest, or whether the court is just wrestling with the best constitutional theory to adopt is unclear.  In the court’s order for additional briefing and re-argument in Rose’s case, the Supreme Court asked the parties to focus on whether a property owner’s rights are violated when government takes property without paying for it and without promising compensation.

According to Scott Township, it has not violated Rose’s property rights, because the promise to pay her is implied by the state law that allows Rose to sue the town for just compensation in state court. The town promises to pay if it loses in court, and thus it says it has not violated any right.

But Rose knows better. Her rights were violated the moment that Scott Township took access to her land and refused to pay her for it.  She feels the constitutional violation every day and should be entitled to enforce her federal rights in federal court immediately, just like Americans do every day for other types of federal rights, like free speech and religious freedom.

Federal courts should not shirk their duty to guard our constitutional rights by sending her to some other court. Those of us who care about private property rights and constitutional protections are rooting for Rose.

Christina Martin is an attorney with Pacific Legal Foundation, a public interest law firm representing Rose Knick in her case against the township.