PLF has filed a motion to intervene on behalf of the New Mexico Cattle Growers’ Association, New Mexico Federal Lands Council, and the New Mexico Farm and Livestock Bureau in a case that threatens to radically expand criminal liability under the Endangered Species Act. If the case is successful, we’ll all need to quickly become experts on each of the nearly 1,500 obscure species covered by the statute, lest our reasonable ignorance land us in jail. 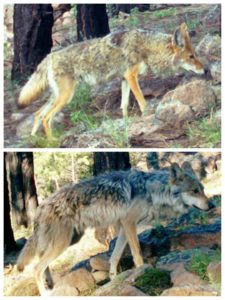 Would you bet your freedom that you’d know which of these is protected? [Photos courtesy FWS]

In the case, radical environmental groups allege that the federal government’s interpretation of the Endangered Species Act’s criminal provisions results in too few prosecutions, delaying the recovery of species. It’s particularly concerned with the government’s practice of not prosecuting people who shoot protected Mexican gray wolves, mistaking them for coyotes or other predators. To be more specific, the group claims that the government isn’t prosecuting people who falsely claim not to have known they were shooting a wolf. To avoid this risk, it argues, the statute should be interpreted to not require knowledge that an act would cause take or what would be taken. In effect, it would convert take into a strict liability offense.

The environmentalists’ cure is worse than the disease. The Endangered Species Act makes it a crime to “knowingly” “take” a member of any one of the nearly 1,500 species subject to its protections. It’s essential that this only apply to people who know that their actions will cause take and what species will be taken.

Consider the sheer breadth of the Endangered Species Act’s “take” prohibition. Shooting is only one — particularly unsympathetic — way that a person can cause take. In fact, the prohibition has a far broader reach. Essentially anything you do that results in some effect on a species could be take. Here are just a few examples:

The number of innocent activities that can run afoul of the take prohibition makes this lawsuit’s argument dangerous. The number and obscurity of the species covered by the Endangered Species Act makes it even more so. The statute protects nearly 1,500 species, including dozens of insects, dozens of snails, and more than a hundred fish (though those numbers are ever changing as environmentalists seek to add new species to the list by the hundreds). How confident are you that you know each and every one of them well enough to ensure that nothing you do affects them?

If allowed to intervene, we’ll argue that Congress couldn’t have intended for people to go to jail because they inadvertently caused the take of an unknown species. If the environmental group succeeds, you might want to invest in a set of endangered species flash cards. A simple, reasonable mistake could devastate your future.