Blog > Op-Ed > The Hill: Here’s why Congress, not the president, should lead on environmental protection

The Hill: Here’s why Congress, not the president, should lead on environmental protection 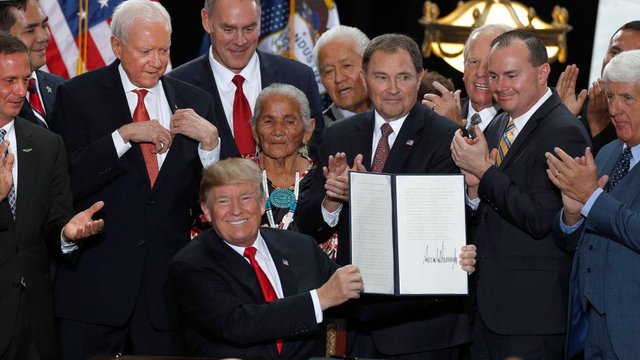 This article was originally published in The Hill on March 25, 2019.

Last month, Congress approved a massive, bipartisan federal lands bill, designating five new national monuments, 1.3 million acres of wilderness, 620 rivers as wild and scenic, and permanently reauthorizing the Land and Water Conservation Fund. This legislative undertaking “touches every state, features the input of a wide coalition of our colleagues, and has earned the support of a broad, diverse coalition of many advocates for public lands, economic development, and conservation,” said Senate Majority Leader Mitch McConnell (R-Ky.). That consensus is impressive in these partisan times, and it suggests these protections will endure.

It is unimaginable that these designations by Congress will be as controversial in two decades as, say, Grand Staircase-Escalante National Monument remains today, 20 years after President Clinton unilaterally proclaimed the monument under the Antiquities Act. The long-simmering political dispute over Clinton’s actions ultimately led to President Trumpsubstantially reducing the size of the monument last year. That, too, is the source of significant conflict.

These two cases reflect conflicting visions of how environmental decisions should be made. When Congress decides, the outcome likely will reflect consensus and compromise. Everyone may not get exactly what they want, but no one completely loses, either. The compromise also is more likely to reflect careful deliberation (the recent public lands bill was in the works for four years) and open debate.

When the executive alone decides, however, the result is more likely to be a one-sided outcome, made with limited public process and without considering opposing views. That’s what happened with the Grand Staircase, which was denounced by former Rep. Bill Orton (D-Utah) as “going around Congress and involving absolutely no one from the state of Utah in the process. There was a major screw-up in the way it was done and how it was drafted.” Utah’s governor and congressional delegation opposed the monument, which is entirely contained within the state. When Clinton announced his decision, Utah officials were excluded in favor of celebrities and environmental activists, including Robert Redford.

Opponents of Trump’s decision to reduce the size of Grand Staircase and nearby Bears Ears National Monument feel the decision was preordained, and the public comment process mere window-dressing. Several lawsuits have been filed against that reduction, which is sure to remain controversial for years.

Simply put, when the president acts unilaterally, rather than pursuing legislative compromise, the result will be more conflict, not less. You simply cannot settle disputed policy questions by letting one person pick the winner.

Ironically, many controversial unilateral executive actions are taken precisely because Congress was working on a compromise, rather than because of congressional inaction. In 1996, when Grand Staircase was proclaimed, Utah’s congressional delegation had proposed a wilderness designation for much of the area, which would have applied greater protections to some areas while avoiding conflicts over others.

Similarly, Bears Ears was proclaimed despite Rep. Rob Bishop (R-Utah) proposing legislation to establish wilderness areas and national conservation areas from the lands that would become the monument, while avoiding controversial restrictions for other lands.

The problem is too much executive power. As with many policy issues, Congress gradually has ceded its constitutional responsibility to the president and regulatory agencies, which have responded by seizing even more power.

In the case of the Antiquities Act, we can directly measure this change. Consider that over the statute’s first 100 years, 17 presidents collectively designated 70 million acres as national monuments. Over the past 12 years, two presidents designated more than 10 times that amount.

For decades, Congress has abdicated its responsibility for regulating the environment, preferring to punt controversial issues to executive branch agencies. Consider that most of the major environmental statutes, such as the Endangered Species Act, the Clean Water Act and the Clean Air Act, have not been significantly updated in decades.

Consequently, regulatory agencies make do with the ill-fitting powers they have, often stretching them in unanticipated ways to meet challenges. However, those unilateral executive actions are much more likely to be controversial and ultimately prone to reversal by subsequent presidential administrations. Trump, for example, has made reversing President Obama’s environmental regulations a focus of his administration. By comparison, legislative decisions, even ones as controversial as ObamaCare, have survived largely intact.

Environmental regulation increasingly swings with the pendulum of presidential politics, to the detriment of regulated businesses, property owners and the environment. For stability, we should demand that power shift back to Congress. The bipartisan lands bill reminds us that such a shift is possible.

Jonathan Wood is an attorney with Pacific Legal Foundation and a research fellow with the Property and Environment Research Center. He represents commercial fishermen in a lawsuit challenging the Northeast Canyons and Seamounts Marine National Monument and a group of public land users in a lawsuit defending President Trump’s reduction of Bears Ears National Monument.

The Hill: Speeding up environmental reviews is good for the economy and the environment February 06, 2020 I By JONATHAN WOOD

Bears Ears National Monument is the wrong way to conserve our landmarks June 13, 2019 I By JEFF MCCOY