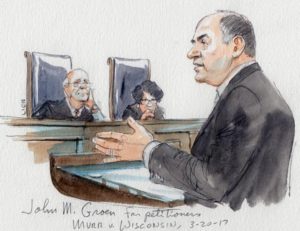 John Groen argues as Justices Breyer and Sotomayor look on.

We had our oral argument in Murr v. Wisconsin. It was a tough argument with lots of questions throughout the argument.  We trust our answers helped dispel some of that confusion.  All in all, it was a good argument and we made all our points with the Court. But, based on the questioning, this could be a close case. You can read the transcript here and a more detailed blog post here. You can listen to the oral argument here.  We expect a decision by the end of the June, though if the Court splits four to four, the Court may decide to wait for Justice Gorsuch’s vote, or at least rehear the case when he is on board.

Victory over another San Francisco scheme against landlords

In 2015 we had a victory in Levin v. City and County of San Francisco — our case where the City demanded landlords pay tenants 2 years worth of rent subsidies if the landlord takes a unit off the rental market. After that victory, San Francisco amended the ordinance by putting a cap on the amount of rent a landlord had to pay and giving landlords the right to “audit” a tenant’s rental payments for three years. Landlords sued again in Coyne v. City and County of San Francisco. We filed a friend of the court brief arguing that this scheme had similar problems to the ordinance in Levin. The trial court has now agreed and held the ordinance to be unlawful. For more, see our blog post here.

Opposition to overcriminalization of innocent mistakes

We filed this opposition to the WildEarth Guardians’ motion for summary judgment in WildEarth Guardians v. Department of Justice. This is the case where environmentalists are demanding that the Department of Justice drop its practice of not prosecuting people for severe penalties under the Endangered Species Act when it looks like the people involved made an honest mistake.  As our brief points out, if the government had the discretion to prosecute people for accidents, then we’d be liable for the harshest penalties if we accidentally stepped on an endangered spider, squashed a rare bug on a windshield, or went surfing within five football fields of a whale. For more about this case, visit our blog here. For more about the government’s policy, see our frequently asked questions here.

We filed this initial brief in P.I.E. v. DeSoto County. Here the county tried to take away permission it had already given to P.I.E. to excavate its property. As a result, lost over two million dollars in value when the DeSoto County Commission rejected the staff recommendation and denied the permit. We’ve taken over the case so we can argue that Florida state law provides remedies in a case like this. For more, see our blog post here.