Will the new Congress do its actual job?

The newly elected 114th Congress will take office in January.  Amid the political commentary surrounding this month’s elections, many talking heads have discussed whether the nation will relive another government shutdown as Republicans in the legislative majority seek leverage over President Obama’s Democrats who control the executive branch. Senator McConnell has assured the media this will not occur, while Speaker Boehner has left himself room to maneuver on the question.

Most look at this question from the perspective of whose political fortunes a shutdown would advance or harm.  This discussion is troubling. Too many presume the executive branch is owed the current level of funding, and has an inherant right to decide how to spend money it taxes and borrows ad infinitem.  That so many think of the power of the purse as a tool for petty gamesmanship reflects a long history of both parties refusing to make hard budget choices and surrendering their authority to the administrative state.

It is not this way in the Constitution.  All legislative authority is vested in the Congress. Not some, not a residual amount, not “whatever the Congress has not yet abandoned to the administrative state.” All. The president, on the other hand, “shall take care that the laws [i.e. the decisions of Congress] be faithfully executed.”  The president has various powers necessary to carry out the executive function. They do not include making laws or authorizing spending.

Throughout the Anglo-American development of representative democracy, the power of elected legislators over the purse has been foundational. It has always been understood as one of the most important bulwarks against monarchic (or executive) tyranny.  The power to set spending limits and priorities is essential to self-government; the lack of such checks is everywhere and at all times associated with despotism.

As constitutional lawyers we regularly focus on the details of the many conflicts between statism and liberty. But we cannot forget the big picture, the basic structure of the republic. The only thing we elect Representatives and Senators to do is decide what the president shall or may do, and how to pay for it. If our legislators continue surrendering the power of the purse to the president, and the legislative power to nameless faceless bureaucracies, then they aren’t doing anything truly valuable for us. 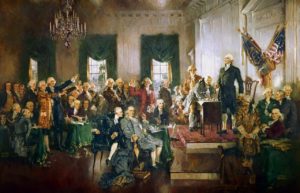