Pacific Legal Foundation attorneys represent two bluff-top homeowners in Encinitas: Tom Frick, and his neighbor, Barbara Lynch. They applied to the California Coastal Commission for a permit to install a new seawall to protect their homes from erosion after a massive storm destroyed the old wall. They also sought to rebuild a stairway connecting their homes on top of the bluff to the property that they own on the sandy beach below. 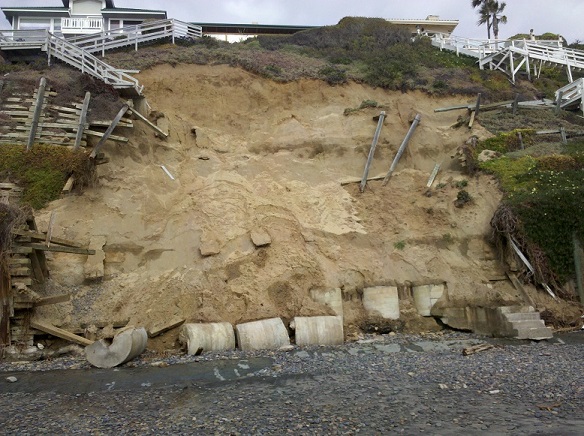 The Commission granted the permit for the seawall, but stamped it with a 20-year expiration date, requiring our clients to reapply for a new permit in 20-years, which the Commission might refuse to issue. In that case, our clients would have to tear down the wall. By imposing such a condition, the Commission sought to preserve its “future shoreline planning options,” so that if “legislative change” and “judicial determinations” in the future allowed the Commission to ban seawalls outright, it could deny authority for our clients’ existing wall. The Commission also denied our clients a permit to reconstruct their stairway, relying on a local planning ordinance that requires “phasing out” private stairways and only permitting public ones.

The San Diego Superior Court reversed the Commission’s decision, concluding that our clients had the right under California law to rebuild their stairway because the Coastal Act specifically authorizes the “replacement of structures destroyed by disasters.” The Court also struck the 20-year expiration date because the Coastal Act requires the Commission to permit seawalls when required to protect existing structures in danger from erosion.

Unfortunately, the California Fourth District Court of Appeal reversed the trial court this week in a 2-1 published decision. The majority opinion held that our clients waived their right to even challenge the 20-year expiration date and the stairway denial by “voluntarily agree[ing] to the conditions” when they pulled permits for the structures. As the dissent points out, however, the homeowners did not “voluntarily agree” to the conditions. In fact, they vigorously objected to them at every step of the administrative process and, they filed their lawsuit challenging the conditions before the Commission issued them.

On the merits, the majority essentially held that rights under the Coastal Act—to build a seawall and rebuild structures destroyed by storms—are circumscribed by local planning policies and the Commission’s authority to impose mitigation measures on permits. Thus, the Commission was within its power to deny the stairway reconstruction because of the City’s land use plan calling for the “phasing out” of private stairways. And, the 20-year expiration date was valid as a form of mitigation—never mind the fact that our clients already paid thousands of dollars to mitigate for the seawall’s impacts on adjacent properties and sand supplies.

The dissent, which takes up more than half of the opinion, rejects the majority’s assertions—that the Commission can curtail all rights in the name of mitigation—and held that the stairway qualified for a permit exemption under both the Coastal Act and the City’s Code, as either a “disaster replacement” or “repair or maintenance.” And it rejected the 20-year expiration date as invalid under the Coastal Act and unconstitutional.

In language largely tracking PLF’s briefs, the dissent finds the expiration condition “would constitute an unconstitutional condition under both the state and federal Constitutions because it is a ‘taking’ of the homeowner’s property.” Citing to PLF’s U.S. Supreme Court victory in Koontz v. St. Johns River Water Management District, the opinion states that “[t]he unconstitutional conditions doctrine provides that ‘the government may not deny a benefit to a person because he exercises a constitutional right.’” Because both the state and federal Constitutions guarantee the right to use and protect one’s property, the Commission cannot take away that right via permit conditions, unless those conditions directly mitigate for the adverse impacts of private property use on public lands, which is not the case with these conditions.

Here, the Commission’s condition that the seawall permit expires in 20 years unconstitutionally forces the homeowners to waive their rights and property interests without any nexus or ‘rough proportionality’ to potential adverse impacts caused by the seawall.

The dissent would have affirmed the trial court’s judgement and stricken the permit conditions.

While we are obviously disappointed with the majority’s decision, we hope to vindicate the dissent’s position as we continue to litigate this case.  You can read more about the case on the Liberty Blog: here, here, here, and in the San Diego Union Tribune here.