On Tuesday, my colleague, Damien Schiff, testified before a senate committee on Environment and Public Works that is investigating government overreach under the Clean Water Act.  The hearing was entitled “Erosion of Exemptions and Expansion of Federal Control — Implementation of the Definition of Waters of the United States.”  Mr. Schiff and others offered powerful testimony documenting specific abuses of the Clean Water Act by the Army Corps of Engineers and the EPA, such as the agencies’ refusal to comply with clear statutory exemptions for such things as stock ponds and normal farming practices.  And the agencies’ reading of the Act to cover virtually all waters in the Country, including permafrost and even shallow groundwater.  One witness testified that her company had been seeking a permit from the Corps for over 27 years to complete a housing project designed to ensure “no net loss” of wetlands with stringent mitigation protocols.

What should be obvious to anyone who has read the Clean Water Act and the Corps and EPA’s expansive interpretation of regulated “waters of the United States,” or who has had any personal dealings with these rapacious agencies, is that government overreaching under the Act is pervasive, severe, and ongoing. As it currently stands, Corps and EPA officials can literally declare any water or land in the Nation a “water of the United States,” subject to complete federal control, without any accountability. The landowner must accept the declaration or risk ruinous fines or imprisonment. This is a prescription for government abuse.

If congress is unwilling to amend the Clean Water Act to protect the regulated public from overzealous enforcement, there is only one solution; the agencies must be held accountable for their unlawful actions in a court of law.  That’s where our Hawkes case comes in.  In U.S. Army Corps of Engineers v. Hawkes, we have argued that landowners have a right to seek immediate judicial review when their property is erroneously designated as wetlands or other waters subject to federal jurisdiction under the Clean Water Act.  A decision in that case will be issued by the U.S. Supreme Court in the next few weeks. If the Court accepts our arguments, which it is likely to do, it will be a victory for property rights and the rule of law affecting literally millions of landowners nationwide who are subject to onerous regulation under the Clean Water Act. 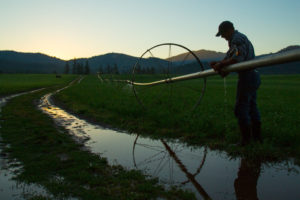