Imagine one quiet morning you are eating breakfast in your own home. Minding your own business and not bothering anyone. Suddenly, there are several loud raps on your door. Rightly startled, you approach the door apprehensively, open it a crack, and carefully peer out. On your doorstep are several heavily armed government agents in bulletproof armor demanding entry into your home to conduct a search. They threaten you if you do not comply. They do not have a warrant and tell you that they do not need one. Aghast, you ask them what you have done and why they think they have the right to enter your home and search without a warrant.

Their answer: Because you own certain kinds of birds. That’s right. Under constitutionally questionable federal and California rules, the U.S. and California departments of Fish & Wildlife claim the power to enter onto the private property and into the homes of licensed falconers to conduct warrantless unreasonable searches. James Madison just rolled over in his grave.

Falconry is an ancient sport that originated in the Far East several thousands of years ago. It consists of capturing, housing, training, and using birds of prey to catch wild quarry for sport. The intense commitment and work required of both falconers and their birds results in close personal relationships between man and animal. For most falconers, their birds are more than just pets: They are members of their families.

But that’s not how the government sees it. The government sees falconry as yet another excuse to violate the individual constitutional rights of Americans. Adding insult to injury, in addition to asserting the power to enter falconers’ private property to conduct warrantless searches, the U.S. and California departments of Fish & Wildlife also assert the power to prohibit falconers from using their own birds in presentations, photography, commercials, or films for profit.

But we are fighting back.

With the help of Pacific Legal Foundation, several falconers, along with the American Falconry Conservancy, today filed a civil rights lawsuit against the U.S. Department of Fish & Wildlife and California Department of Fish & Wildlife challenging these rules as unconstitutional under the Fourth and First Amendments to the U.S. Constitution. The Fourth Amendment provides that “[t]he right of the people to be secure in their persons, houses, papers, and effects, against unreasonable searches and seizures, shall not be violated.” The Fourth Amendment protects both the privacy and property rights of falconers. Especially when it comes to being secure in their private homes; one of the original bases for the Fourth Amendment. In addition, under the First Amendment the government is specifically prohibited from enforcing any law that abridges the freedom of speech. This includes expressive conduct, like using your pets in presentations, photographs, or film for profit.

One of the Founding Fathers once wrote: “One of the most essential branches of . . . liberty is the freedom of one’s house. A man’s house is his castle.”

We could not agree more. 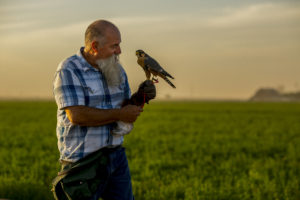 Check out our short documentary about Peter here.