POTUS on WOTUS: “It’s a horrible, horrible rule. Has sort of a nice name, but everything else is bad.” 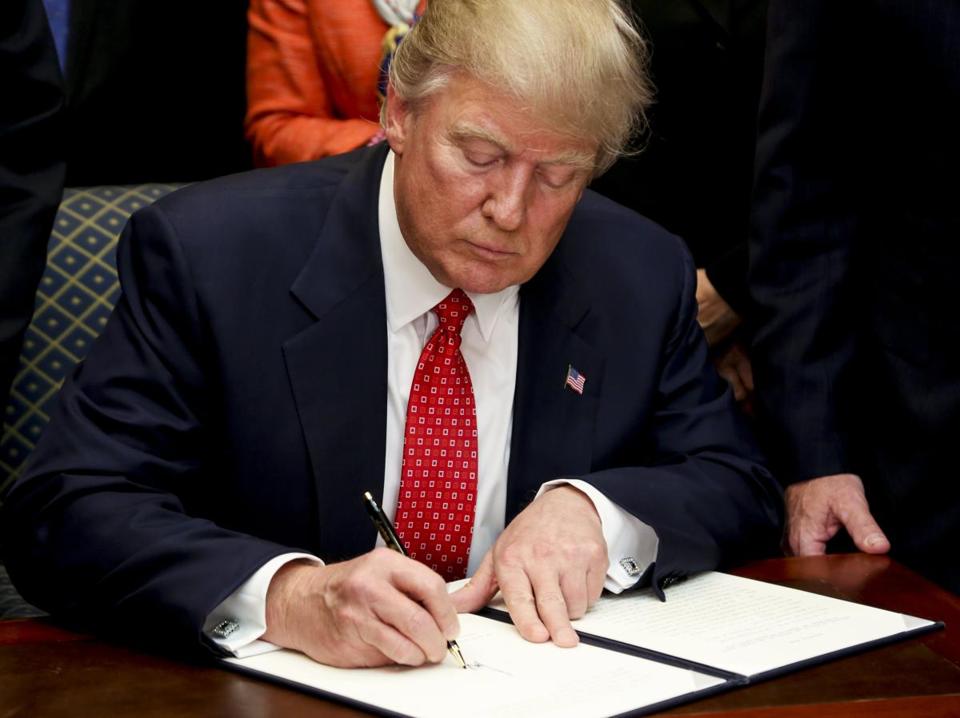 The President of the United States issued this Executive Order calling for the EPA to review and revise the indefensible Army Corps and EPA WOTUS rule redefining “waters of the United States”  subject to federal control under the Clean Water Act. We can think of a no more qualified candidate for regulatory rollback than this infamous rule. What is most heartening is that the Executive Orders calls for the adoption of the “Scalia rule” from our Rapanos case. And, at the signing ceremony, the President called out our case on behalf of Andy Johnson as an exemplar of EPA’s wetlands policies gone awry. That was the case where the EPA threatened our Wyoming client with fines of $37,000 per day because he built a stock pond without a permit. The problem is that the Clean Water Act expressly exempts stock ponds from its permitting requirements. We won the case, but this is the sort of fight that no small landowner should ever have to put up with. We’re hoping that the new executive order will save a lot of small landowners from EPA’s wrath. For more on the order, and its likely impact on pending WOTUS litigation, see our blog post here.

In Central Coast Forest Association v. California Fish and Game Commission, the California Supreme Court ruled here in favor of Central Coast Forest Association, holding that the California Endangered Species Act allows petitions to remove a species from the state’s endangered species list when it can be alleged that the species should never have been listed in the first place. The state had argued that a petition could argue only that the species had recovered, not that it had never belonged on the list. The Court agreed with the foresters and sent the case back down for the parties to argue over whether the listing had been in error as alleged. Here, the Forest Association found previously unconsidered evidence that Coho salmon in streams south of San Francisco Bay are not native to those streams, are present due only to hatchery support and will never survive in these habitats because they are not naturally suited to them. PLF filed an amicus brief in the California Supreme Court in support of CCFA’s right to pursue a delisting petition based on error in the original listing.

We filed a petition asking the full Sixth Circuit Court of Appeals to rehear the takings case of Wayside Church, Henderson Hodgens, and Myron Stahl in Wayside Church v. Van Buren County. All three lost their property to Van Buren County after they fell behind on their 2011 taxes. The County foreclosed on their properties and sold each for significantly more than taxes owed, and pocketed the excess proceeds as a windfall to the government. Wayside Church owed $16,750 in taxes, penalties, fees, and interest. The County sold it for $206,000, more than 12 times the church’s debt. Similarly, the County sold Hodgens’s property for $47,750, to pay a $5,900 tax debt; it sold Stahl’s property for $68,750 to cover a $25,000 debt. The Sixth Circuit declined to rule on the merits, saying that the case belonged in state court. We have taken over the case and are arguing that the full Court should take the case because the state’s courts can offer no viable remedy to the landowners. For more, see our blog post here.

In Jarvis v. Cuomo the Supreme Court denied the petition for writ certiorari filed by family day care providers who objected to be conscripted into the status of “public employees” and mandatory union representation — and union dues — by the State of New York. These providers objected on First Amendment grounds to being forced to subsidize union speech. We filed an amicus brief, which you can find on our blog post here.

As reported previously,  we filed this amicus brief on the merits in support of Gloucester County School Board in Gloucester County School Board v. G.G. We had argued that the federal courts should not defer to agency opinion letters in interpreting federal regulations or statutes.  Our blog post explained our argument here. Last week the Department of Education rescinded its opinion letter on the issue, which appears to moot the question of whether deference is due to it. But the question may still be alive as to whether Title IX actually requires the rule in question. The Court asked the parties for supplemental briefing on how the case should proceed. This week, on March 1, 2017, both parties agreed that the Court should proceed to decide the substantive statutory interpretation question, but differed on how soon that should occur. The student asked the Court to proceed with oral argument, currently set for March 28, 2017, while the school district asked the Court to defer argument until April and to ask the Justice Department for briefing on its view of how the case stands.

A California federal district court ruled in Granat v. United States Department of Agriculture against our arguments that the Forest Service illegally shut down motorized recreational access to the Plumas National Forest. We are reviewing our options.

Atlantic City has an eternal belief that if it keeps on condemning private property in order to give it to the casinos, it can turn the City around. It the latest iteration of that theme, in Birnbaum v. Casino Redevelopment Reinvestment Authority, the city is attempting to take a private residence for no apparent good reason at all. In this case brought by our friends at the Institute for Justice, we filed this amicus brief arguing that eminent domain for redevelopment is a bad policy that hurts the middle class. For more, our full blog post is here.

U.C. Irvine Law School’s Dean Chemerinsky is at it again, this time calling for a filibuster and writing to criticize Judge Gorsuch’s views on whether the constitution should be interpreted in an “originalist” manner consistent with the understanding of the people who ratified the Constitution and its amendments. Chemerinsky lets loose such howlers as: “Under an originalist philosophy, it would be unconstitutional to elect a woman as president or vice president.” Either the good Dean understands nothing about originalism or assumes he can trick his readers. In any event, for an excellent and highly readable rebuttal to Chemerinsky’s folly-filled critique of Judge Gorsuch and originalism, see this piece by PLF’s Tony Francois, Gorsuch Filibuster Would Be a Mistake, from the Los Angeles Daily Journal.