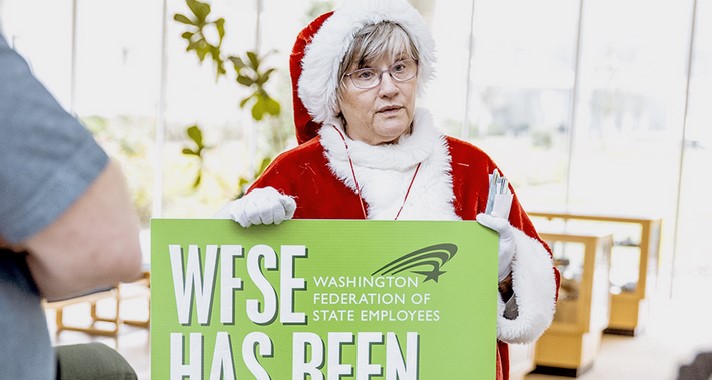 In early December, a federal court in Washington held that government has broad leeway to kick people off public property if the government doesn’t like what they have to say. The Christmas season timing of the ruling is ironic: The federal court held that the Washington Department of Ecology did not violate the First Amendment when it kicked out a leafleter dressed as Santa.

The Santa-clad visitor had come from Freedom Foundation, a Washington state non-profit that informs public employees of their right to opt out of union dues. Their leafleters rely heavily on access to public spaces in order to reach their audience: unionized government employees. Freedom Foundation had adopted a holiday-themed campaign during the Christmas season as a fun way to garner interest in their message. So suited up in Santa costumes and carrying holiday-themed posters and pamphlets, Freedom Foundation staff visited a number of government buildings, handing out information about employee rights, union membership, and how to opt out if an employee so wanted.

Meanwhile, the Department of Ecology has allowed myriad organizations to participate in fairs, farmers markets, and art exhibitions in the lobby. And despite the Department of Ecology’s rule against outside groups sharing information in their lobby, the department has regularly invited outside groups to come to the various events in the public lobby and share information. The only group on which the department has enforced their no leafletting rule? Freedom Foundation and Santa.

Freedom Foundation, represented by Pacific Legal Foundation, sued to vindicate their First Amendment right to peacefully hand out information in public spaces. But according to the federal court, the Department of Ecology’s obvious viewpoint on discrimination is just fine. The court held that the department’s building was not open to the public and therefore they could exclude whoever they wished. The court did not even address Freedom Foundation’s argument that the Department of Ecology discriminated against them because of their message. PLF and Freedom Foundation are appealing the court’s decision.

Governments can exercise some control over their property and even close off their property to the public if necessary. But what government can’t do is restrict someone’s speech because they don’t like what you have to say.

Government unions are trying to trap employees into paying union fees for life October 31, 2019 I By DEBORAH LAFETRA

Freedom of speech means freedom not to speak, too August 13, 2019 I By TIMOTHY SNOWBALL