Pacific Legal Foundation has a long history in the U.S. Supreme Court.  It has won seven cases in a row, with two more pending.  Most of these cases relate to protecting private property rights from overreaching government.  Abuses under the Clean Water Act were the focus of our 2006 Rapanos case and our 2012 Sackett case.  In Sackett, the High Court unanimously held a landowner could go to court to challenge an EPA compliance order.

Chantell and Michael Sackett bought a half-acre parcel of land near Priest Lake, Idaho, so  they could build a home.  The lot sits in a built-out subdivision.  It has an existing sewer hookup and is zoned for residential construction.  Prior to their purchase, the Sacketts undertook a “due diligence” investigation.  None of their research indicated any Clean Water Act permitting history or requirements for the property, or similarly situated properties in the neighborhood.

With all local permits in hand, the Sacketts began leveling the lot for construction.  But federal officials immediately ordered the Sacketts to stop work.  Although the lot appeared to be dry land, months later, EPA sent the Sacketts a compliance order asserting the Sacketts property contained a “wetland” subject to federal regulation under the Clean Water Act that could not be filled without a federal permit.  The compliance order prohibited the Sacketts from constructing their home, as previously authorized by local authorities.  And, it required the Sacketts immediately to begin substantial and costly restoration work, including removal of the fill material, replanting, and implementing a three-year monitoring program during which the property must be left untouched. They would also have to provide off-site mitigation and pay fines exceeding the value of the land. Further, the compliance order warned the Sacketts of overwhelming civil penalties (up to $75,000 per day) and possible criminal sanctions for failure to abide by its dictates.  Although the Sacketts disputed the presence of wetlands on their half-acre lot, the EPA provided the Sacketts neither any proof of violation nor an opportunity to contest EPA’s claims.  Represented by PLF, the Sacketts went to court claiming agency overreaching had denied them their constitutional right to due process.  With a vote of 9-0, the Supreme Court justices concluded the Sacketts had the right to contest the jurisdiction of the EPA in a court of law.  This was the first time in 40 years that a court had so ruled.

PLF brought the Sackett case to give landowners nationwide the means to level the playing field by allowing judicial review when faced with an onerous compliance order that is based on an error in jurisdiction or improper assertion of authority under the Clean Water Act.  This precedent saved Andy Johnson.

As Mr. Johnson explains in his own words, he and and his family bought a 9-acre parcel of land in Wyoming.  Among other things, the Johnsons decided to use the land to raise a few head of cattle.  To that end, they installed a stock pond on a small creek that flowed through their property.  They obtained a state permit for the pond and relied on a provision in the Clean Water Act that expressly exempts the construction of farm or stock ponds from federal regulation.  But, as with the Sacketts, the EPA ignored their own regulations and issued a compliance order against the Johnsons threatening ruinous civil and criminal penalties for allegedly filling in a “water of the United States” without federal approval.  The compliance order required the Johnsons to restore the property to its original condition although the pond was providing numerous environmental benefits, including habitat for fish and wildlife, contributing to the growth of wetlands and riparian areas, and filtering downstream flows.

With the help of their consultant, Ray Kagel, the Johnsons could demonstrate that the stock pond was exempt from federal regulation but the EPA refused to listen or even provide any evidence contradicting the pond’s exempt status.  That is, until PLF filed a suit on behalf of the Johnsons to challenge the EPA compliance order.  Only after the suit was filed did the EPA come to the bargaining table to discuss the case.  After months of back forth with the agency, the EPA and the Johnsons reached a settlement in which the Johnsons may keep the pond without a permit or penalties.

The suit filed on the Johnson’s behalf, to challenge the compliance order, was made possible because of PLF’s victory in the Sackett case.  Without that precedent, the Johnsons would have had no recourse.  They would have had to comply with the illegal demands of the EPA or risk ruinous finds and/or imprisonment.

We don’t always see how the cases we litigate in the Supreme Court translate into real world protections for property rights and individual liberty, but we did in this case.  And this is why we will continue to fight for your rights in the court. 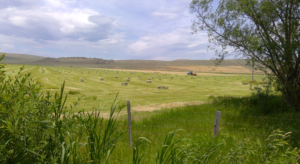