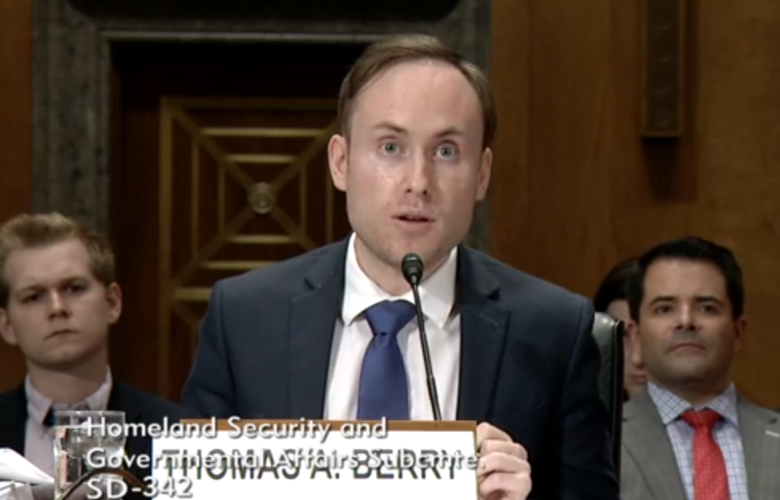 Today, the Senate Subcommittee on Federal Spending Oversight & Emergency Management held a hearing on PLF’s recent report showing how a majority of rules made by the Department of Health and Human Services are unconstitutional. One of the report authors, PLF Attorney Thomas Berry, testified during the hearing about the serious need to bring accountability back to our bureaucratic government agencies.

Berry’s opening testimony during the Senate hearing is below.

Thank you, Chairman Paul and members of the committee, for inviting me to testify today on rulemaking by unaccountable agency bureaucrats. Today I’ll make three points: First, this rulemaking practice has weakened the separation of powers and harmed political accountability. Second, this practice is rampant, including 98% of FDA rules. Third, this rulemaking is unconstitutional. I’ll conclude my remarks with potential solutions.

When senators like you and your colleagues question nominees for agency leadership, you’re well aware of the rulemaking power that those positions hold. Robert Califf, for example, received several questions at his 2015 hearing about potential rulemaking choices he might make before he was confirmed as FDA Commissioner. Why, then, were the vast majority of rulemaking decisions during his tenure made not by Califf, but by a career FDA employee, never nominated by the president, nor confirmed by the Senate? An employee who had been hired before Califf and would stay on well after? In such a system, the decisions this body makes to confirm or reject nominees simply don’t guarantee any effect on the judgments made within an agency. Similarly, the president has never nominated—nor is he expected to know of—these career agency bureaucrats. When rulemaking decisions are made by low-level employees, the public is deprived of the ability to trace any blame to the top, depriving these rules of democratic accountability.

Further, this type of rulemaking has become rampant. The following numbers come from a recent first-of-its-kind Pacific Legal Foundation study that I coauthored with Angela C. Erickson. We collected all final rules issued within the Department of Health and Human Services going back to 2001. The result? Seventy-one percent of these rules were issued by persons who had never been confirmed by the Senate. That’s nearly 2,100 rules. Within FDA, it was 98% of rules.

This is not limited to minor rules, such as typo fixes. Omitting rules with only small changes like technical amendments, we found that 1,300 substantive rules were signed by non-Senate-confirmed employees, or 63%. And looking only at rules deemed significant by the Office of Management and Budget, non-Senate-confirmed employees issued about 250 rules, or 34%. These are rules with combined economic effects in the billions of dollars.

And finally, the Constitution. The Supreme Court has explicitly held that the power to issue final rules is a significant authority that can be exercised only by a duly appointed officer. The Constitution divides officers into two categories, principal and inferior. The key difference is that principal officers must be confirmed by the Senate, without exception. The Supreme Court has held that an inferior officer’s work must be “directed and supervised” by a Senate-confirmed supervisor. In the absence of such supervision, Senate confirmation becomes a constitutional requirement. And the ability to issue a final rule without the approval of a superior means that such supervision is absent. Contrary to Professor Parker’s testimony, the FDA has essentially conceded that for many rules, that supervision is absent. That is why rules can be issued only by officers confirmed by the Senate. Rules issued any other way violate the Constitution.

The bottom line is this: In just one department, thousands of rules have been issued, and continue to be issued, by career employees who have no accountability to the Senate or to the people, which subverts the system our Framers designed.

The simplest and most direct would be a short bill requiring that every rule published in the Federal Register must be signed by a Senate-confirmed officer.

Short of this sweeping solution, individual organizational statutes for the various departments should be amended, so that sub-delegations of rulemaking authority are no longer permissible except to officers confirmed by the Senate.

Further, Congress can bring attention to this matter through its oversight powers. Hearings such as this one can help encourage the executive branch to alter its rulemaking practices.

And because sub-delegation is always made at the discretion of particular officers, the Senate can question nominees on this practice and ensure that they commit not to sub-delegate rulemaking power below the level of Senate-confirmed officers.

Thank you again for allowing me to testify today. As the body charged by the Framers with vetting the character and judgment of Executive Branch officers, it is natural that the Senate should take a leading role in reining back an abusive end-run around that system. Congress has several options at its disposal to restore the balance our Framers designed, and to ensure that every rule binding on the public is made by a politically accountable officer.