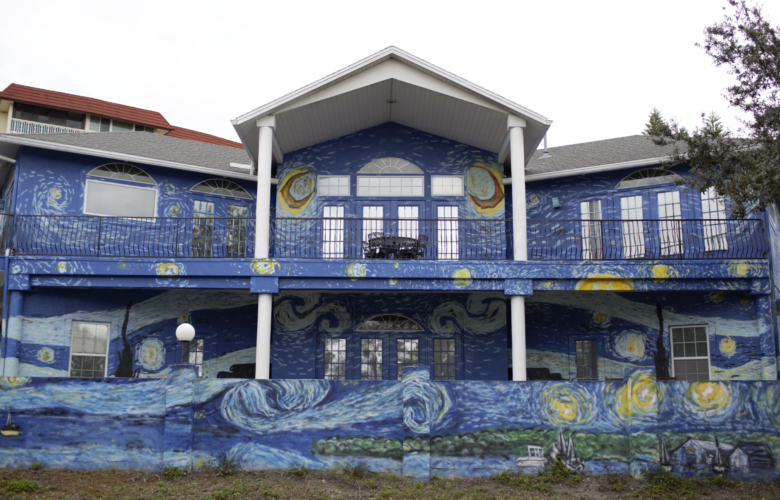 A Manhattan Beach duplex with a unique paint job has been mired in controversy. A few months ago, Manhattan Beach resident Kathryn Kidd hired a local artist named Z the Art to paint her house in a bright pink color with a pair of cheeky emoji faces. While Kidd enjoys the house, her neighbors have made it clear that they do not.

A report earlier this month highlighted efforts by a group of neighbors to force the city council to take action against the homeowner. One neighbor suggested that it would be a “slippery slope” if the city “cower[ed] behind freedom of speech.” Others suggested that perhaps the city could use graffiti or signage laws to get rid of the mural. But before Manhattan Beach officials try to get creative with the law, they should examine a similar case that took place across the country.

The art may be different, but the story is nearly the same: a house with a colorful and unique mural and a group of neighbors who wanted it gone.

Nancy Nemhauser and Lubek Jastrzebski, a couple in Mount Dora, Florida, painted their house in a colorful homage to Vincent van Gogh’s The Starry Night. Their son, who has autism, was comforted by van Gogh’s artwork. Even though the city had no ordinances concerning the painting of homes, government officials ordered the homeowners to paint over the mural.

Code Enforcement initially tried to categorize the mural as graffiti. But the common understanding of graffiti is that it is illicit, or without permission. Nancy and Lubek had commissioned an artist to paint their home with the mural. The city backtracked, and instead classified the mural as an “unpermitted sign,” and began fining the homeowners $100 per day.

The fines reached over $12,000 before Pacific Legal Foundation stepped in to represent Nancy and Lubek. My colleagues and I worked quickly to file a motion in federal court, and two days later a judge issued a temporary restraining order halting the fines and prohibiting any enforcement against Nancy and Lubek. Sensing inevitable defeat, the city settled. The city paid $15,000 to the homeowners, the Mayor of Mount Dora issued a public apology, and you can still visit The Starry Night house today. It was a total victory for the homeowners and their First Amendment right to paint their home.

So far, the city council of Manhattan Beach seems to understand that it can’t enforce laws that aren’t on the books, and that trying to shoehorn behavior that certain people don’t like into existing laws is a dangerous precedent. The unequal or improper enforcement of laws directly implicates important constitutional protections like Equal Protection and Due Process.

The Manhattan Beach Planning Commission recently asked their staff to evaluate regulation options and determine whether murals like the emoji house are protected by the First Amendment. I’ll help the staff out: they are. And courts are especially dubious of government actions that are aimed at silencing particular speech. Mount Dora learned that lesson the hard way.

Local governments don’t exist to get rid of anything that curmudgeonly neighbors dislike. There are multiple private tools that can be used to create enforceable agreements between neighbors. Homeowners’ associations and private covenants (a type of contract between property owners) can limit uses of property. And, it’s a lot more neighborly for a group of homeowners to cooperate with one another and develop mutually agreed upon community standards instead of using the coercive power of government to punish one individual because a vocal group disagrees with the paint job on her house.

Regardless of the emoji house’s aesthetic benefit to the neighborhood — which private citizens are free to debate — the government doesn’t get to decide what art is good or bad. So I have a message for Manhattan Beach: it’s not cowering to realize that the First Amendment applies to all types of artistic expression — including murals — and that the true slippery slope would be allowing government officials to choose which speech is allowed or prohibited based on subjective opinions about the content.

I’m pleased that — so far — Manhattan Beach’s government has realized the limits to its authority. But if it bows to pressure, I also have a message for Ms. Kidd: you know who to call.

Scar tattoos are a First Amendment right too June 03, 2019 I By DANIEL ORTNER