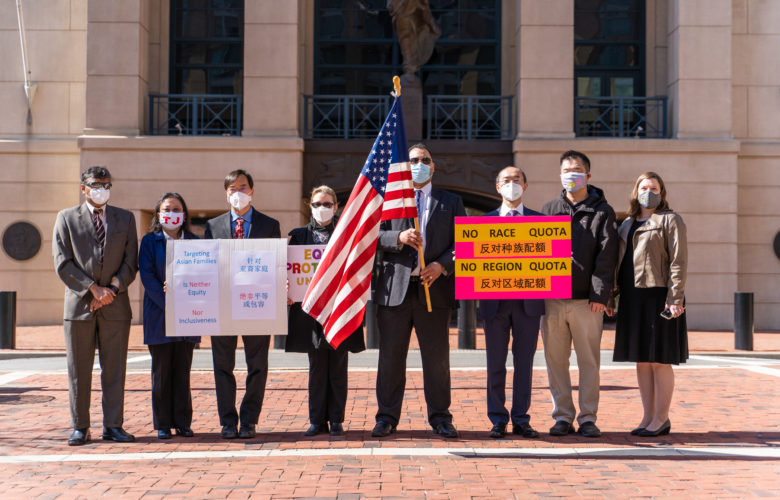 This op-ed was coauthored by Asra Q. Nomani, the mother of a 2021 TJ graduate, is co-founder of Coalition for TJ and vice president at Parents Defending Education.

On June 5, Principal Ann Bonitatibus of the Thomas Jefferson High School for Science and Technology (TJ) stood before the 2021 graduating class and pronounced with a dramatic flourish that the students were about to graduate from “the No. 1 school in America.”

That’s when a voice cried out from the bleachers: “Keep it that way!”

Those words were spoken by a TJ father who immigrated to the United States from China after surviving the Cultural Revolution.

Over the past year, TJ and Fairfax County Public Schools officials have systematically set out to reduce the number of Asian American students at the highly regarded high school — and based on the most recent admissions data, their purge is succeeding.

First, some background: TJ was established in 1985 as a magnet school for gifted students dedicated to studying in the fields of science, technology, engineering and mathematics, or STEM fields as they’re colloquially known. The school has been the crown jewel of the United States’ educational system for decades, ranked the nation’s top high school by U.S. News and World Report for the past two years.

But this past year, school leaders bemoaned a lack of “diversity” at TJ and launched a crusade to change admissions. The student body is about 80 percent minority, but the wrong kind of minority for school officials, with about 70 percent Asian and about 10 percent of the minority students Black, Hispanic and multiracial.

Last fall, district leaders set out to change that by re-engineering the school’s famously strict and competitive admission standards. Tossing the merit-based, race-blind admissions exam and other rigorous standards, they instituted a “holistic” admissions process with quotas and subjective criteria, such as “experience factors,” that would allow them to achieve a more “equitable” and desirable racial balance at TJ.

It was clear that the new standards were aimed at a particular result: dramatically reducing the number of qualified Asian American students admitted to TJ. In response, a multicultural coalition of concerned parents and families came together to combat the new racist standards. These brave parents held protests in front of the school, carrying signs written in Hindi, Bengali and Chinese. We warned that the slippery new standards were not only designed to actively discriminate against Asian American students, but would also end up watering down the school’s long-standing commitment to achievement through hard work and merit.

One coalition member, Himanshu Verma, an immigrant from India, TJ dad and founder of a data analytics firm, crunched the demographic data and projected the revised standards would lead to a drastic decrease in Asian American students admitted to TJ. He was correct. School district officials announced that, as a result of their new admissions system, they slashed the percentage of Asian students admitted to TJ to 54 percent this year from 73 percent last year. The percentage of Blacks and Hispanics increased — as it did for White students.

When we describe this as a purge against Asian American students by leaders at TJ and Fairfax County Public Schools, that is not rhetorical excess. It’s an accurate interpretation of what’s happening based on the hard data. The number of Asian American students isn’t dropping because they’re less qualified; it’s dropping because the school has rejiggered the process to make race a factor in the decisions.

This spring, the Coalition for TJ, a grass-roots organization, filed a federal lawsuit against the Fairfax County School Board, arguing that the new admission standards violate our children’s constitutional right to equal protection. In May, U.S. District Judge Claude Hilton rejected the school district’s request to dismiss the case. Ours is the first suit of its kind to clear that important hurdle.

In so doing, Hilton noted from the bench, “Everybody knows the policy is not race-neutral, and that it’s designed to affect the racial composition of the school.”

Inside Courtroom 800, parents sighed in relief. For those of us who have made that argument for months, it was affirming to know that at least one jurist could see through the school district officials’ obfuscations and grasp the reality of the issue.

Our battle in northern Virginia is not just a local dispute between parents and school administrators at one high school. The use of race in K-12 school admissions is part of a much wider national campaign by education officials intoxicated by the fashionable ideology of critical race theory taking it upon themselves to undermine the meritocratic system of achievement at schools from San Francisco to New York City and Boston. Under the cover of fighting against discrimination and injustice, they’re launching a new era of discrimination and injustice. It’s up to parents to draw a line in the sand against this abuse of power.

The American Dream of equal treatment has been a beacon of light for many, including the Chinese-American father who shouted from the bleachers. As he said, we must keep it that way.

This op-ed was originally published by The Washington Post on July 2, 2021.