In California Cannabis Coalition v. City of Upland, the California Supreme Court accepted review of this case on June 29, 2016.  The issue is whether taxes imposed by initiative are “imposed by local government” and thus subject to voter adopted initiatives that provide for voter approval.  PLF filed this letter brief asking that the Court grant review.  This case was brought to the California Supreme Court by our friends at Howard Jarvis Taxpayers Association which is supporting the city. Interestingly, the city here is opposed to an initiative that contained a new local tax. Our larger concern here is that the lower court decision opens up a huge loophole through which tax-hungry local governments can evade the limitations or California’s Proposition 13. 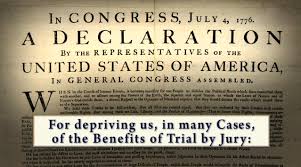 One reason why many landowners are resentful when government takes their property is because the government often doesn’t pay a fair price. The practice of “lowballing” by government appraisers is notorious, and many landowners are forced to hire attorneys in order to get a fair price. (In fact one retired law professor, Gideon Kanner, keeps up a blog with his special “lowball watch” about such cases.) A saving grace for landowners is that if they can get their case before a jury, they can often have a much better chance of relief. Not so when the federal government takes your property. The rules in federal court prevent that from happening. “But what about the Seventh Amendment?” you may ask, “doesn’t it guarantee a right to a jury trial?” That’s what we think and that’s what we’re saying in this  amicus brief on behalf of ourselves and our friends at Reason Foundation and the American Civil Rights Union. The brief is an excellent and timely trip through our early history, and points out that our revolution was animated, in part, by King George’s taking away of jury trials in colonial America. Read more on our blog post here.

We filed an appeal of the district court’s decision to dismiss our challenge to Palo Alto’s demand that the Jisser family pay $8 million to the tenants of a mobile home park that the Jissers would like to close. The court held in Jisser v. City of Palo Alto that the Jissers cannot sue over a challenge to a violation of the federal constitution in federal court unless they sue first in state court.  As explained in our blog post, however, we see no good reason why a citizen should not be able to challenge a violation of the federal constitution directly in federal court. For more information, including a video, see our press release here and our blog post here.

The Fifth Circuit Court of Appeals issued an adverse split decision in Markle Interests v. U.S. Fish & Wildlife Service.  The case concerns a challenge to the Service’s designation of our client’s property as critical habitat for the dusky gopher frog.  What makes the Fish and Wildlife Service’s actions here a particularly outrageous example of Endangered Species Act abuse is that our client’s land (i) is not occupied by the frog, (ii) does not contain the essential habitat requirements for the frog, and (iii) likely never will be habitable for the frog.  Even more remarkable, the Service does not dispute this. Nevertheless, the court upheld the service’s designation both on statutory grounds and against our challenge that this designation violates the Constitution because it has no impact on interstate commerce. For more on the court’s reasoning, see our blog post here.

The trial court dismissed our complaint in Cedar Point Nursery v. Gould. This is the case where we are challenging the ability of union organizers to go onto private property for the purpose of union organizing. The court found the trespassing isn’t a taking because it doesn’t have an economic impact. But, of course, a physical invasion doesn’t require economic impact to be an unlawful taking. We’re evaluating our next steps.

The Court of Appeal ruled against us in Bay Area Citizens v. ABAG & MTC. The decision below was affirmed on all grounds. This was our challenge to the “stack and pack” regional plan designed to shove Bay Area development into a transit-friendly 3% of the area’s landmass.The published opinion throws the proverbial kitchen sink at us, ruling that (1) the statute forecloses our argument; (2) if it didn’t, CARB’s consistent interpretation would; and—just for good measure—(3) even if the statute and CARB’s interpretation wasn’t against us, the agencies’ mere disclosure of what they were doing was enough to satisfy CEQA.

The New York Court of Appeals ruled in favor of asbestos litigation plaintiffs in In the Matter of New York City Asbestos Litigation. This court held that a manufacturer of a valve — which contains no asbestos, can be found liable for a worker’s exposure to asbestos because the valve was in machinery to which third-parties added asbestos.  The court found that the manufacturer had a duty to warn the end-user because the manufacturer knew that asbestos would likely be added by someone else to machinery using the valve. This is an astonishingly broad and dangerous opinion. As our blog notes, the policy implications of such a holding—which PLF detailed in this amicus brief in support of the valve maker—the New York court adopted a standard with nearly limitless potential liability. Saucepan manufacturers will have to warn of the dangers of grease fires. Jelly manufacturers will have to warn of the danger of peanut allergies. For more, read our full blog post here.