Government power must be limited 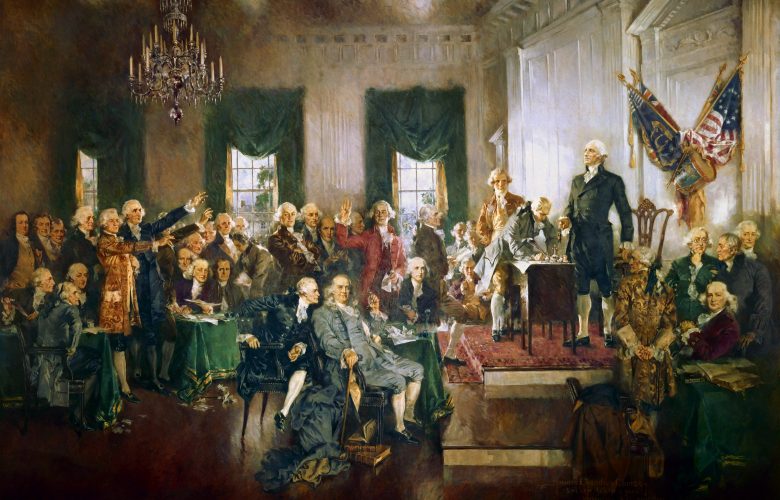 This is the second part in a series discussing the principles of the American founding, their embodiment in the United States Constitution, and the ways in which the Supreme Court has all too often negated these principles to the detriment of individual liberty:

As previously discussed, the adoption of the Declaration of Independence, authored primarily by Thomas Jefferson and intended as a simple statement of the former British colonies basis for separation from the British empire, is one of the most astounding events in the history of the western world. For the first time, a people declared their own independent right to found a political community, based not upon heritage, or wealth, or the “Divine Right of Kings,” but upon an idea. An idea about natural rights, the sovereignty of the people, and the basis of just government. Far from being outdated historical relics, these truths are just as applicable now as they were over two hundred years ago. These ideas were, and continue to be, nothing short of revolutionary.

But having successfully broken away from the mighty British Empire in the War of Independence, the Founders (soon to be the Framers) became tasked with the creation of a new system of national government that would both guarantee the liberty of each individual while also securing the support of each of the constituent states. Their first attempt an abject failure, the Framers found themselves in a dilemma of historical proportions. And their solution was nothing short of genius.

If the Declaration of Independence is the beating heart of the American republic, the United States Constitution is the body that brings it to life.

The Constitution represents not only the ultimate expression of political compromise and level-headedness, but is the most envied, most copied, and most successful founding document in the history of the world. Rather than create a monarchy, an empire, or a democracy, the Framers chose to create a republic. A republic of equally applicable laws; not subject to the arbitrary will of fickle men or majorities. A republic of limited and divided powers, that would retain the sovereignty of the states and liberty of the individual. A republic based upon the sum total of all western civilization’s knowledge of political science. The Greeks, the Romans, the European experiments: Everything moving towards this one opportunity and point in history. Next to the Declaration, the adoption of the Constitution is the most astounding and unexpected event in the history of western civilization.

The Framers plan of checks and balances was elegant:

Article I creates Congress, the law-making branch. Divided between an upper chamber called the Senate, which would represent the states in their sovereign capacities through infrequent elections via the state legislatures (before the passage of the 17th Amendment destroyed this carefully crafted system), while the lower house called the House of Representatives would represent the people directly and be subject to frequent democratic turnover. While Congress was intended to be the primary branch of the federal government, its powers were not intended to be unlimited. Section 8 of Article I lays out seventeen specifically enumerated powers over which Congress exercises exclusive control. If a power is not expressly listed, Congress is supposed to be powerless. This was the original reason why there wasn’t a Bill of Rights included in the original Constitution: How can the federal government abuse power that it does not possess? Article II creates the presidency, the law-enforcing branch. Never intended to the be the pseudo-legislator that they are today, the president’s intended role was to conduct foreign affairs and war, with limited influence over domestic affairs or policy, and insulated by popular democracy through election by an electoral college comprised of members chosen by the states. Article III creates the Supreme Court, the law-deciding branch. The sole power of the Court, appointed by the president and confirmed by the senate, is to decide “cases and controversies” under the Constitution, laws passed by Congress, and legitimately executed treaties with foreign nations. Article IV concerns several procedural matters, such as making sure that full faith and credit is given to the public records of each state. Article V describes the amendment process, the sole intended way of modifying the Constitution, not through the now all too common tinkering by the Supreme Court and cancerous administrative agencies. Article VI describes several other matters, including the Constitution being the supreme law of the United States, and Article VII describes the ratification process. And that is basically it. A national government of limited, divided, and overlapping powers, with the majority of power reserved to the states and to the people.

It was from this simple document, enacted in the name of “We the People of the United States,” and barely more than 4500 words in length, that the American republic was born. And for over two hundred years, despite wars, a Great Depression, Supreme Court justices all too willing to substitute their own political preferences for what the Constitution and other laws require, and the consistent threat posed by the modern administrative state, and over a dozen new amendments (some good, some bad), the Constitution and American republic have survived intact. But the Constitution was not a perfect document; a reflection of imperfect human nature, perhaps. The cost of bringing the southern states into the fold was to retain the institution of slavery (though attempts are made in the Constitution to weaken it), the cost of which would be a later devastating Civil War. Women would have to wait over one hundred years to receive their full legal rights, and the fight for other legal recognitions have been on going. But this is not cause to question the Constitution, without which so many human advancements and progress would not have been possible. The fight to restore and protect the Constitution by bringing about the principles of the Declaration of Independence, is the story of America. It is our story as Americans, no matter race, sex, or creed. And it is a story that will never be over so long as tyranny and oppression exist.

James Madison, the “Father of the Constitution,” once wrote: “The happy union of these states is a wonder; their Constitution a miracle; their example the hope of liberty throughout the world.” May the Constitution of the United States continue to serve as a beacon of hope for the world, and as an example of what free people motivated by high ideals can accomplish.