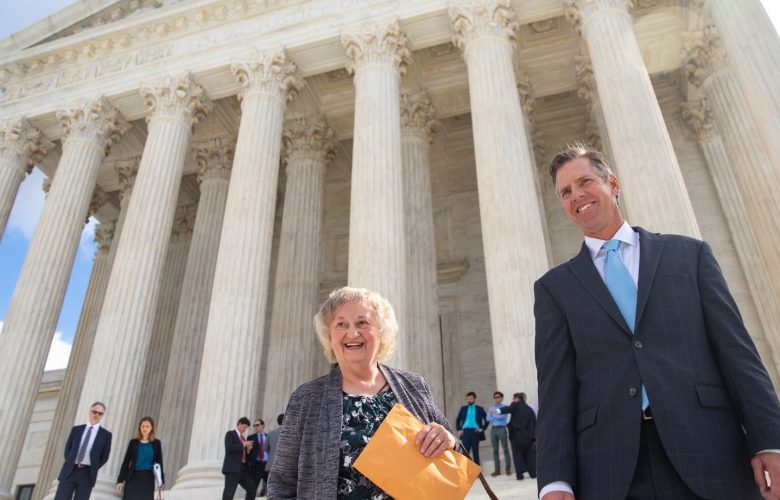 Today, the Supreme Court gave property owners everywhere a major victory, overturning a 34-year precedent that has robbed countless individuals of their property rights. And you have an unassuming woman in rural Pennsylvania to thank.

In a 5-4 opinion on Knick v. Township of Scott written by Chief Justice John Roberts, the Justices held that the government violates the Constitution when it takes an individual’s private property without paying for it first. The Court ruled that “[f]idelity to the Takings Clause and our cases construing it requires overruling” [the Court’s 34-year-old decision] “and restoring takings claims to the full-fledged constitutional status the Framers envisioned when they included the Clause among the other protections in the Bill of Rights.”

The assault on Rose Knick’s rights began in 2013 when officials from the Township of Scott, Pennsylvania, walked on her farm without permission, and—based on the presence of a few loose, unmarked stones—declared part of Rose’s property a gravesite and demanded she open it to the public.

Under a newly passed local ordinance, Rose would be forced to open her private property to strangers, and trim grass and prune shrubs regularly to keep the area as if it were really a public cemetery. If she failed to comply, she would face fines of $300 to $1,200 a day, and town officials refused to compensate Rose for any of these demands.

After years of legal battles with the Township of Scott, and two Supreme Court oral arguments earlier this year, the Court has finally acknowledged that she has a right to defend her property rights in federal court.

The court recognized that Congress intended to open federal courthouses to such claims to ensure that constitutional rights are fully protected.

“Contrary to Williamson County, a property owner has a claim for a violation of the Takings Clause as soon as a government takes his property for public use without paying for it.” The Constitution allows government to take private property and make it public, like the Township did to Rose, but only if it pays “just compensation.” And the township refused to pay anything.

But the federal courts could not hear her claim either, because of the 1985 Williamson County Supreme Court decision. That decision held that constitutional property rights claims against local governments must be filed in state court, even though federal law explicitly allows such claims to be heard in federal court.

In other words, Rose would have to file her claim in state court—the same state court that had already turned her away.

For more than a decade, PLF has fought to get the Williamson County decision overturned. Senior Attorney Dave Breemer—who argued Rose Knick’s case before the Supreme Court— filed a dozen such petitions before the court finally granted review in Knick’s case. We have enjoyed many incremental wins and we have also lost many times. But PLF’s perseverance has finally paid off.

With their ruling on Rose’s case today, the Supreme Court recognized that Williamson County was wrongly decided. And as the Chief Justice explains in his decision, “Williamson County was not just wrong. Its reasoning was exceptionally ill founded and conflicted with much of our takings jurisprudence.”

Williamson County wrongly held that the government does not violate the constitutional right to be paid when government takes property, so long as a wronged property owner can later go to state court and win a lawsuit paying him for the property that was taken. The Chief Justice today explained, “A later payment of compensation may remedy the constitutional violation that occurred at the time of the taking, but that does not mean the violation never took place. The violation is the only reason compensation was owed in the first place. A bank robber might give the loot back, but he still robbed the bank.”

The court made clear that Williamson County has created needless hurdles for individuals seeking to enforce their rights. Chief Justice Roberts explained that Williamson County’s “state-litigation requirement relegates the Takings Clause ‘to the status of a poor relation’ among the provisions of the Bill of Rights.” Congress opened federal courts to such claims and the Supreme Court should never have closed that door.

Today’s decision is a win for Rose Knick and property owners everywhere, and for PLF and our supporters who have joined with us to defend property rights from government overreach.  Today we restored some of those rights.