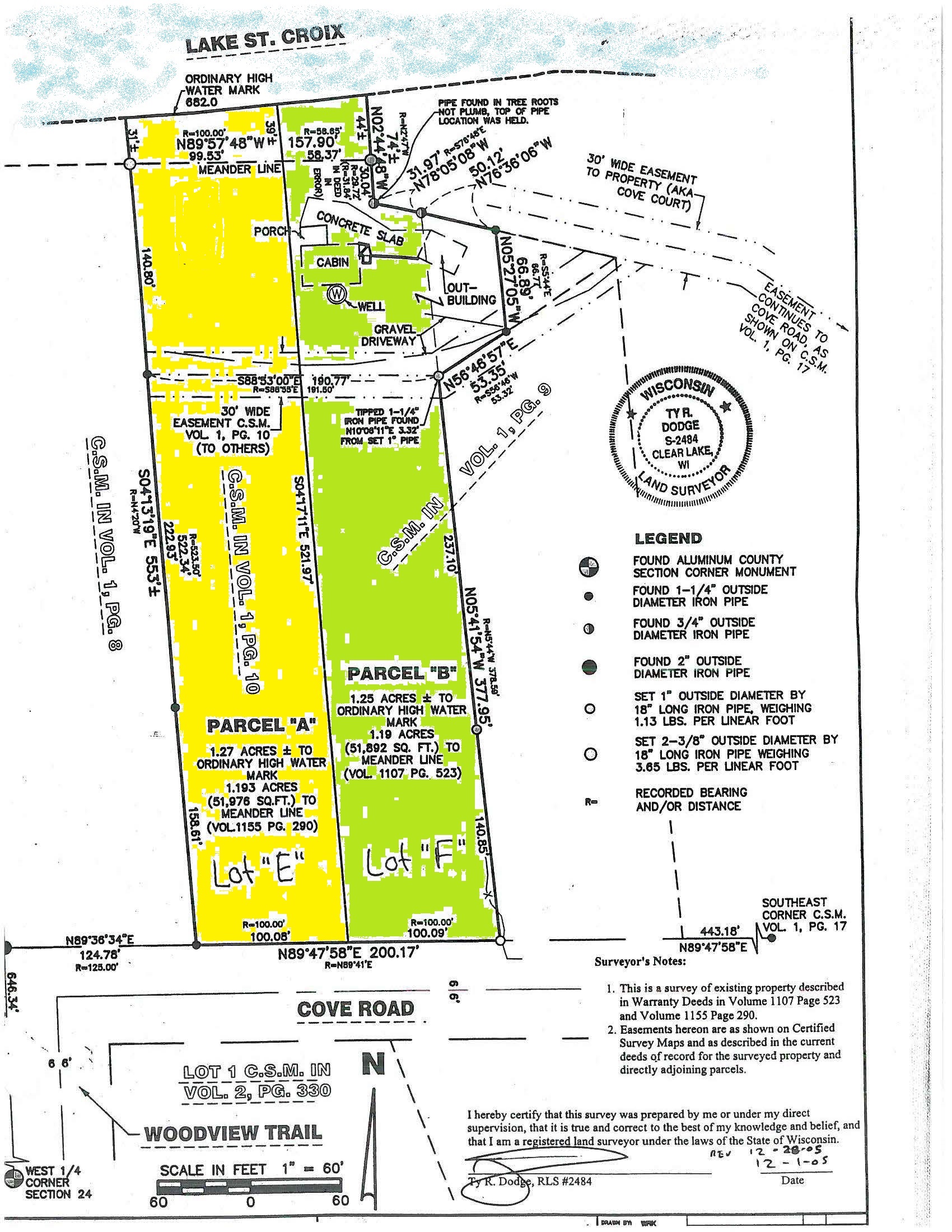 In a decision that’s so unworkable that it will surely fail the test of time, the Supreme Court ruled against the Murr family’s quest to receive some recompense for the acre of waterfront land that the County of St. Croix decided to regulate out of existence. In Murr v. Wisconsin, the Murr family owned two separately deeded lots that were purchased separately by their parents in the 1960s. They built a small cabin on one lot and held the other one as an investment for the future. But when the time came to sell, they couldn’t. It seems the town decided an acre lot was too small to build upon. Now, if that’s all the family owned, the town had an exception. But since the family owned the lot next door, the exception didn’t apply. Their investment lot couldn’t be sold and couldn’t be developed. But when they sued, claiming that the regulation took away all the use and value of the lot, the Wisconsin courts said, “no way.” Because the family still owned the other lot, the one with the cabin, they hadn’t lost everything. In other words, the more you own, the more government can steal. The Murrs appealed to the Supreme Court, and we argued that in deciding on whether property has been taken, courts should look first at the lot subject to the restrictions, and not at other nearby property in the hands of the same family.

But, as Chief Justice Roberts pointed out in dissent, all these factors simply aren’t relevant to the question of what the property is. Indeed, the tests put forth by Justice Kennedy will prove to be totally unworkable. The cart has been put before the horse and the horse will be pushing the takings doctrine around in circles forever — or until the Court comes to its senses.

This isn’t the end of this issue for us. There can be fixes in other state supreme. courts. There can be legislative fixes. And, ultimately, the Court will see just how unworkable this is.

This week the Supreme Court favorably decided Matal v. Tam (formerly Lee v. Tam). The Court held 8-0 that the disparagement clause of the Lanham Act (trademark registration) violates the First Amendment because it discriminates against speech based on its viewpoint. Under the disparagement clause, the government could refuse to register trademarks if the mark-in-question disparaged any person, living or dead. This case began when Simon Tam, an Asian-American, formed a rock band comprised of other Asian-Americans, and named his band The Slants, in order to reclaim the derogatory word and provide a platform to call attention to discrimination against Asian-Americans. However, because some take offense to the word, when Tam sought to register the band’s name as a trademark, the government refused registration due to the disparagement clause. With the Court’s decision this week, the government can no longer deny trademark registration just because some bureaucrat finds a word or phrase to be objectionable. We discussed the details of the decision as part of a symposium at SCOTUSblog, and as usual, at Liberty Blog. And you can watch The Band Who Must Not Be Named here, where the band quite appropriately notes, “sorry if you take offense, but silence won’t make amends.”

This week, Vero Beach High School and its school administration waved the right flag and acknowledged what the rest of the world came to know thanks to Fox & Friends: J.P. Krause, our client, won his high school senior class presidency fair and square. J.P. did not harass anyone when he gave a short and funny campaign speech in favor of his candidacy, and his school administrators violated the Constitution when they disqualified him from the presidency based on that speech. After we submitted this warning letter to Vero Beach High School’s administration regarding the school’s unconstitutional decision, the story went viral and we forced the school to reverse itself without PLF even darkening the courthouse door with a lawsuit. For more see our blog post here.

Howling at the wolf listing

This week, on behalf of the Oregon Cattlemen’s Association, PLF notified the U.S. Fish and Wildlife Service of our intent to sue over its failure to reach a final determination on a proposal to remove the gray wolf from the Endangered Species List. The Service proposed delisting in February 2014, recognizing that the gray wolf listing is invalid, but is now over two years overdue in issuing a final rule. This is a clear violation of the Endangered Species Act. Continued listing also prevents states and local communities from devising practical management strategies that help protect cattle from depredation by gray wolves. Read more here.

The district court issued this order  in WildEarth Guardians v. DOJ,  striking down DOJ’s policy of not prosecuting individuals if they accidentally hurt an endangered species. Relying on an earlier Ninth Circuit case, the court held that you can be criminally prosecuted for “knowingly” violating the ESA’s take prohibition for knowingly engaging in an action that causes take, regardless of whether you knew what species would be taken. Thus, if you thought the bug that you crushed was an ordinary bug, but it was in fact endangered, you can be in for a heap of trouble. An appeal is likely.

Earlier this week, the Washington State Court of Appeals issued its decision in Olympic Stewardship Foundation v. State of Washington Environmental and Land Use Hearings Office, in which PLF submitted an amicus brief.  The decision upholds a Jefferson County ordinance that requires (1) all shoreline property owners to dedicate a 150-foot buffer as a mandatory condition on any new development and requires (2) certain property owners dedicate a public access easement across their property—a requirement identical to the one struck down as unconstitutional by the U.S. Supreme Court in Nollan v. California Coastal Commission. To reach those results, the court ruled that, in adopting the Shoreline Management Act, Washington’s legislature rendered property rights “secondary” to the public’s interest in the environment—again, a position that stands in stark contrast to U.S. Supreme Court case law, including Palazzolo v. Rhode Island which recognized that states cannot extinguish property rights simply by enacting a law. The court did not end its assault on constitutional rights there, however. The opinion also ruled that there is no fundamental, constitutionally protected right to use one’s property. The court, apparently, was not aware that the U.S. Supreme Court put this notion to rest nearly a century ago in Village of Euclid v. Ambler Realty Co. For more on this shocking opinion, read our blog post here.

Denying cert today in Bloomingdale’s v. Vitolo, the Supreme Court once again passed on the opportunity to rule on whether California’s Labor Code bounty-hunter statute, the Private Attorney General Act, which deputizes employees as “representatives” to sue their employers, is exempt from the general rule that permits employers and employees to have a contract where they agree to arbitrate workplace disputes. Both the California Supreme Court and the Ninth Circuit Court of Appeals hold that it is exempt, thus encouraging the plaintiffs’ bar to tack on PAGA claims to otherwise arbitrable claims as a get-out-of-arbitration free card. Eventually, the U.S. Supreme Court will have to address this, because there are dozens of employment and consumer protection statutes that purport to “deputize” people to enforce state law. Today, however, is not that day.