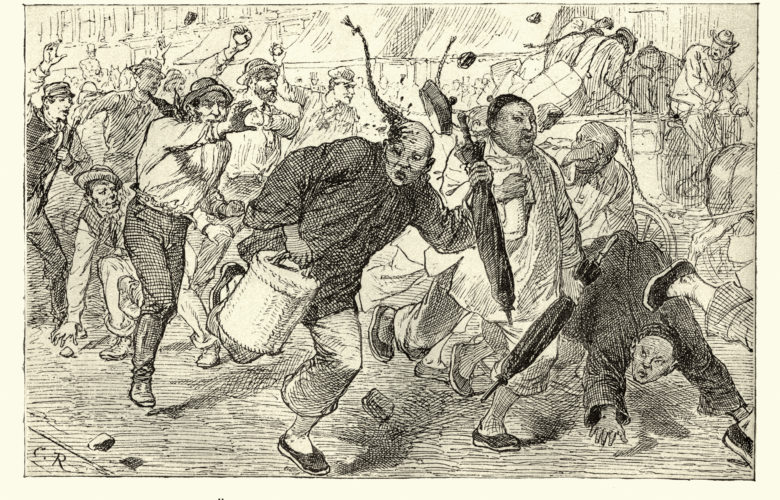 The United States of America was founded on the noble premise that all men are created equal. This right is so important that we fought a Civil War over the principle. Following that war, the Fourteenth Amendment was added to our Constitution to ensure that state and local governments must also treat all individuals equally before the law.

Despite the promise of this inalienable individual right, governments of all levels have—and continue to have—a sordid history of treating individuals unequally along racial and ethnic lines. Jim Crow laws immediately and rightly come to mind. Less reported, however, is state-sponsored discrimination against Asian-American individuals.

In the 1850s, the United States saw an influx of Chinese immigrants in search of work in the mining and railroad industries. With railroad expansion, this new infrastructure offered new opportunities for immigrants looking to better their lives and grab their slice of the American Dream.

These jobs were high risk and came with low wages, but many Chinese immigrants were willing to accept these terms in exchange for a better life in a country that prides itself on being a land of opportunity.

But some Americans were not waiting to embrace the surge of Chinese immigrants with open arms. Instead, the belief that Asians were coming to steal “white jobs” spread like wildfire.

These anti-Chinese sentiments pervaded the justice system—the very institution that was supposed to uphold equality under the law. In the 1854 case of People v. Hall, the California Supreme Court ruled that an individual of Asian descent could not testify against a white person in court.

In that case, George Hall shot and killed Ling Sing, a Chinese immigrant. The primary witness to the crime was also Chinese, rendering him/her unable to legally testify.

Imagine that you witness a violent crime and are legally forbidden from testifying against the attacker. This seems unfathomable in the land of the free, but this is exactly what happened when the California justice system failed to uphold the promise of equal protection.

In 1871, the “Chinese Massacre” occurred in California and 17 Chinese men and boys were lynched. The violence was the result of an altercation between two rival Chinese groups. A white man got caught in the middle and was killed, resulting in more than 500 white and Hispanic rioters surrounding and attacking a Chinese community in Los Angeles.

For a split second, it looked like some justice would be served when eight of the rioters were convicted of manslaughter. But their convictions were soon overturned, and no one else faced repercussions for the lynching.

In 1875, the United States passed the first restrictive immigration law in history. The law restricted the entry of Chinese women and was rationalized as being a safeguard against the belief that these women were “temptations for white men.”

As the 1870s dragged on, the U.S. economy took a turn for the worse. Looking for a scapegoat, the public cast blame on Chinese immigrants. The situation did not improve as America entered the 1880s.

As the mining industry continued to boom out West, Chinese immigrants continued to be demonized by some Americans who claimed they were stealing their jobs.

The Chinese Exclusion Act of 1882 passed with overwhelming support, prohibiting the immigration of all Chinese individuals for 10 years.

In 1885, Rock Springs, Wyoming, set the stage for the next act of mass violence against Chinese Americans miners when a mob of around 150 people surrounded the mine and killed 28 people and burned nearly 30 homes.

In the midst of the chaos, many Chinese miners were able to escape the violence by fleeing to a nearby town to wait out the storm. This offered only a false sense of security, as those seeking protection were told that a train was waiting to take them farther away from the fighting. Instead, it took them back to the center of the violence.

Eventually, federal troops were brought in to impose order, a protection that did not end for 13 years.

As if the 1882 Chinese Exclusion Act wasn’t bad enough, the Geary Act of 1892 prolonged the prohibition of Chinese immigrants for an additional 10 years. The law also required Chinese immigrants to carry IRS-issued “certificates of residence” with them at all times. An individual caught without the proper documentation faced deportation or hard labor. Bail was a possibility, but only if a “credible” white witness spoke on their behalf.

In 1900, bubonic plague made a resurgence in San Francisco. Its origins were traced back to an Australian who came to America via ship, but the first person to contract the plague in the United States was an immigrant from China.

Immediately, the public turned against the entire community. Police swarmed Chinatown, forbidding residents from leaving. But not all residents were kept under such prohibitive laws—white residents could come and go as they pleased.

Chinese residents, on the other hand, had to undergo random searches of their homes and the destruction of personal property—the very same grievance that American colonists endured at the hands of British soldiers, contributing to the start of the Revolutionary War.

The internment of Japanese-Americans by Franklin Delano Roosevelt in the wake of the attack on Pearl Harbor is probably the most well-known instance of government-sanctioned discrimination against Japanese-Americans.

The Supreme Court upheld the internment of Japanese-American in an awful 1943 decision that was explicitly overruled only in 2018.

The post-Vietnam War era saw an uptick in Vietnamese-American discrimination. While many Vietnamese immigrants fled communism in search of safety and a better life in America, they were instead met with hostility.

Many settled in Texas, where they started their own shrimping businesses. This resurrected the belief that immigrants were coming to steal white jobs. The Ku Klux Klan was quick to respond, donning their white hoods and setting shrimping boats on fire under the cloak of night.

It would be wonderful to conclude this story with a triumphant ending in which discrimination was stopped. But it continues today.

The history of discrimination against Asian-Americans has been driven by pernicious stereotypes. Many of those stereotypes persist today in the context of admissions to public and publicly funded schools.

Pacific Legal Foundation is involved in a series of cases filed against educational institutions that have changed their admissions policies in deliberate attempts to restrict the number of Asian-American students accepted to their schools. This is done in the name of “equity.”

At prestigious academic institutions like Harvard and Yale, Asian-American racism is common. Many of the progenitors of these policies claim they boost racial equity. But their policies to racially balance the schools specifically discriminate against Asian-American individuals and deny them their fundamental right to equality before the law.

Equality before the law for all individuals ought to be, in Thomas Jefferson’s words, self-evident. It is the promise of the Declaration of Independence and the Fourteenth Amendment. It is written into the fabric of America. But when one group is favored or disfavored because of race, ethnicity, nationality, or skin color, we have failed in our national promise.

This is why PLF is fighting for all individuals to be treated equally under the law. Discrimination against Asian-Americans is all too prevalent and has been tolerated for too long.

As PLF attorney Wen Fa said in his testimony before the House Subcommittee on the Constitution, Civil Rights, and Civil Liberties on the rise of Asian-American discrimination:

“One of the most important features of our republic is that we are governed by the rule of law. And there is no rule of law without equality before the law. That principle requires the government to treat us as individuals and recognizes that every individual is unique. It forbids the government from treating us differently and labeling us according to some arbitrary government-imposed stereotype. As the late Justice Scalia put it, ‘In the eyes of government, we are just one race here. It is American.’”

Racial equality means standing up against Asian-American discrimination in academia April 05, 2021 I By BRITTANY HUNTER